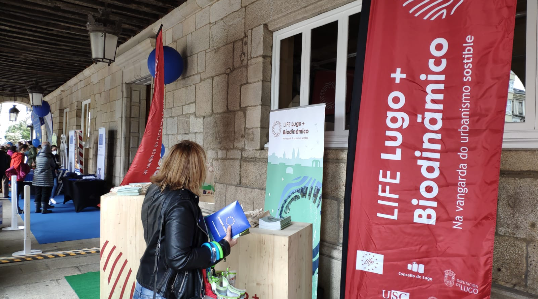 The City Council of Lugo held, on May 9, Europe Day with a series of activities including, among others, the presence of LIFE Lugo + Biodinámico as a European project that is committed to the sustainable future of the city.

On this day there was a first institutional act chaired by the Mayor of Lugo, Lara Méndez, in which the Manifesto was read in favor of the rapprochement that Europe makes between the peoples that make it up. In the manifesto, Lara Méndez highlighted that “from the City Council of Lugo we believe in a plural and multicultural Europe, open to the world, egalitarian, supportive, inclusive and cohesive because we believe that only in this way will we design a useful project at the service of citizenship. In fact, we cannot understand Lugo without Europe, which contributed to the improvement of the quality of life of the residents through the funds provided in the strategies that have already been implemented and through the that we are developing to inhabit in a greener and more sustainable city, more humane and inclusive, in which the recovery of public spaces for citizenship, the promotion of employment, the protection and promotion of our places and our natural resources prevails or the dissemination and care of our heritage.”

In addition to LIFE Lugo + Biodinámico, the activities and information tables also included projects that the Council is developing with European funds, such as Muramiñae:da Muralla ao Miño.