On Tuesday July 23, the Biodynamic Plan was presented to the media based on which the Multiecological Neighbourhood of the city of Lugo will be planned, whose bidding was approved in the past few days.
During the presentation, which was attended by the President of the Deputation de Lugo, the deputy Pilar Porto and the director of PEMADE and professor of Campus Terra, Manuel Guaita, the Mayor, Lara Mendez, stressed that this neighborhood contemplates the creation of 1,200 houses and green spaces, which will contribute to the fight against climate change. 45% of these homes will be public, to meet the needs of neighbors.

This Biodynamic Plan lays the foundations of Multiecological Neighbourhood of Lugo, the first in Spain, which will be developed in the municipality to improve the welfare of neighbors and which is also born with the objective of being an example of planning that can be exported to other medium-sized European cities. “Climate change forces municipalities to adapt to its effects, as Europe indicates. But for us, for years, this is a Government conviction, since we believe that the future is in the hands of cities that know how to integrate urban green, renewable energy, energy efficiency, less motorized mobility and circular economy in a territorial strategy of adaptation to this climate change,” told the Mayor.

This new neighborhood, one of the axes of LIFE Lugo + Biodinámico, will be developed in A Garaballa, and will have wood as a structural element for the construction of housing, promoting sustainable production and consumption and mitigating climate change. The design and construction of these houses will take into account the inclusion of bioclimatic criteria and energy efficiency. In this space will also raise the building Impulso Verde, which will be the first public building to be built in Galician wood and which will apply the catalogue of sustainable measures prepared by the Council of Lugo by the hand of the University and will be published on our page. 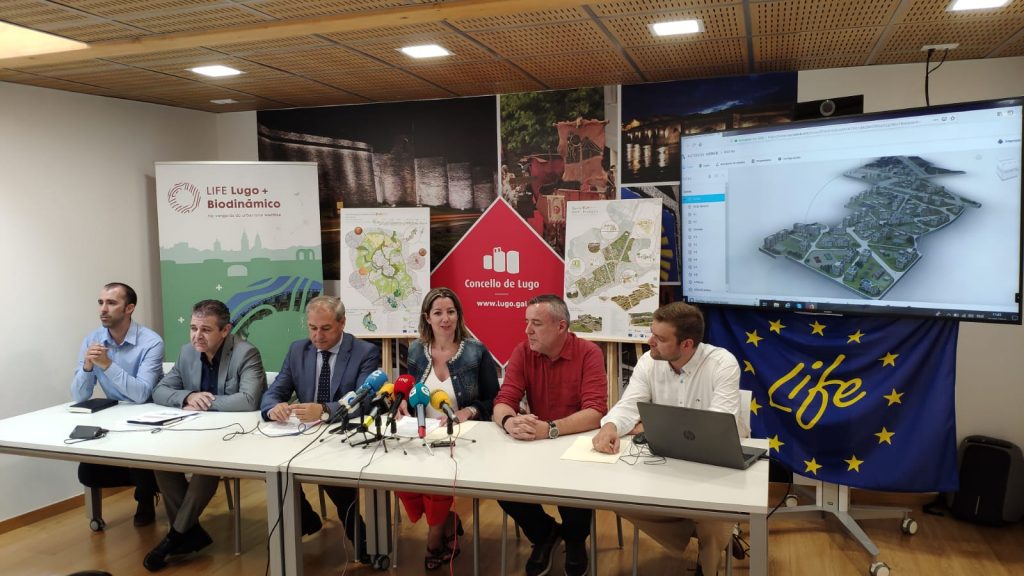 The Multiecological Neighborhood, among other measures, contemplates:

– the adaptation to the natural land for the rational use of the territory and natural resources, guaranteeing the compatibility between growth, development and economic progress with the preservation of the environment and the values of landscape, culture, history and ethnography the environment.

– the review of habitability parameters to guarantee the comfort and safety of the citizens, in relation to temperature, shadows, soundscape, green volume, urban diversity or pollutant immission.

– the promotion of the use of clean materials, products and technologies that reduce polluting emissions and greenhouse gases from the construction sector, as well as reused materials and recycling that contribute to improving efficiency in the use of resources. Emphasis will be placed on the use of wood as a structural element in the construction of buildings in substitution of other materials such as steel or concrete, thus reducing environmental impact.

– the organization of spaces, forming an “urban village” that provides neighbours with creative and communal housing, transport, facilities and services, public spaces and small businesses. In this way, a wide range of uses will be created in the neighbourhood.

– To achieve the maximum level of self-sufficiency to obtain a carbon-neutral system by betting on renewable energy generation. To this end, urban heat networks will be created to reuse the biomass in the area to supply a biogas plant, which will be the “district heater”, in order to prioritize renewable energy rather than fossil fuels, energy poor.

– look for the maximum water self-sufficiency that combines collection measures with saving and efficiency measures.

– incorporate in the building a urban vegetation strategy, with roofs and balconies that can accommodate hydroponic crops, solar panels and even glazed greenhouses. Within this framework, facilities will be promoted that will provide food and basic products to supply the population, stimulating green growth and the circular economy.

– promote alternative and sustainable mobility, with the installation of bicycle lanes throughout the neighbourhood and footpaths to encourage walking. These spaces will have green roads and naturalized spaces with autochthonous species to improve the quality and landscape integration of the environment.

– make public space the structuring element of neighbourhood planning, with a network of facilities and green spaces that are the main axis of social life in the neighbourhood.

– to apply the gender perspective in urban planning, to reinforce participation, the distribution of resources and to reduce structural discriminatory values, favouring effective equality.