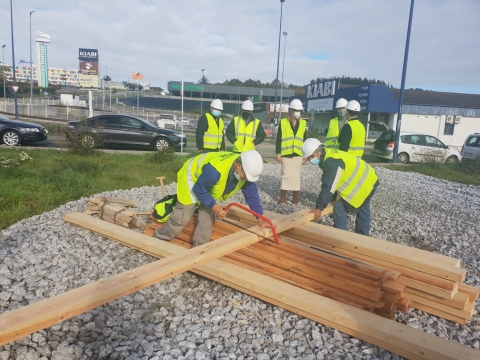 On Tuesday, November 3, work began on the Impulso Verde building, with the presence of Mayor Lara Méndez and the Councilor for Sustainable Urbanism, Miguel Couto.

The building Impulso Verde will be built with a structure of cross-laminated wood panels and glued laminated wood foundations, in the A Garaballa neighborhood, and will be the first public building in Galicia built with certified native wood, specifically of a sawmill in Alfoz, in Mariña Luguesa. This building will be the seed of the first Multiecological Neighborhood in Spain, designed to offer its neighbors urban and constructive solutions that reduce pollution and, thus, combat climate change from the city of Lugo.

The work, which has been awarded this year to the company EGOIN SA for 1.5 million euros, it has an execution period of 15 months, taking into account that “the construction of the structure and the building enclosures will be erected in 3 or 4 months, half the time that in a concrete building”, Lara Méndez highlighted. In addition, she added: “the importance of the wood coming from Lugo, specifically from A Mariña, will also give a boost to the forestry sector using wood as a constructive element of the resilient and sustainable cities of the future, in whose design we are working from the Council”.

Its construction is based on a assembly of CLT panels from a size of 3×3 to 3×13.5 meters. The panels in question are raised on the concrete base and are joined together by means of specific metal brackets and lag screws. Initially, the central laminated wood structure will be mounted on the floor and it will be erected together with the ground floor panels that will serve for the lateral bracing of said structure. Afterwards, the first floor slab panels are placed and wall panels and upper slabs will be placed until reaching the roof height.

In this sense, it should be noted that the central block of the building will be raised, leaving the staircase area for the end so that the ventilation installations can be carried out. Additionally, the south façade panels will also be left for last. Once the main structure has been erected in CLT, the laminated wood framework of the south facades will be assembled and, once assembled, it will be raised to be placed in place and then assemble the remaining CLT panels of that facade. When the ventilation installations are completed, the panels of the stair area and the laminated wood frame of this facade will be assembled, previously mounted on the ground, as will be done with the frame of the south facade. Finally, the different deck gridshell will be assembled. In this case, it is also planned to mount the geometry of each gridshell on the ground and lift each one of them into place.

This construction model will mean energy consumption savings of 74% compared to existing office buildings, and 54% compared to new construction. As regards CO2, it will emit 90% less than concrete and steel buildings (50 tons compared to 470) and in addition, it will absorb 280 tons of emissions. As for innovations, it will be a building with a almost zero energy balance, that is, it will be capable of producing its consumption with alternative energies. When built, it will be monitored to assess its performance and even detect whether it can produce more power than it consumes.

From a spatial point of view, the building will connect the user with nature through the use of wood and the insertion of landscaped spaces, intended for rest and relaxation, since it will be surrounded by a new park with draining pavements, autochthonous species, rain gardens and a large area of ​​urban gardens. For public use and with permanent activity, Impulso Verde will house municipal services, as well as a coworking for companies related to the environment and climate change.

The plan with the construction phases of the building can be consulted and downloaded here:
Plano construción edificio Impulso Verde